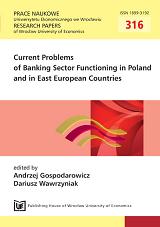 Summary/Abstract: Changes in the ownership structure in the Polish banking sector started with the market reform of the Polish economy and have continued to take place. Diversity of goals and factors influencing them makes it impossible to separate various stages of ownership transformations in the Polish commercial banks analyzed in the study. The main goal of the study is, however, to assess the growing significance of ownership changes from the perspective of “the exit strategy”. Completion of “the exit strategy” based on a return to control of money supply and interest rates by central banks will also influence the commercial banks in Poland. The study presents an analysis of stimulating and inhibiting factors for the process of further ownership transformations in Polish commercial banks.