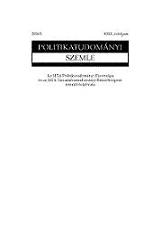 Summary/Abstract: One of the major hypotheses of the paper is on the basis of the antecedents in the domestic academic literature that the constitutional development of the period after the Hungarian system change can be described by the legal and political constitutionality categories of Richard Bellamy. Between 1989 and 2010 it was the legal constitutionality paradigm of the left liberal side which was dominant in Hungary, the refl ection of which in the theory of democracy is Bruce Ackerman’s fundamentalism of basic rights. The process of drawing up a constitution which started in 2010, is the 12th amendment of the 1989 Constitution, and ultimately the four amendments of the approved Fundamental Law represent a sharp breakage compared to the earlier period and it has brought to the surface the concept of the right, namely political constitutionality which had been in a subordinate position ever since the system change (which would correspond to Ackerman’s monist concept within the approach of the theory of democracy). Ever since the new Fundamental Paw has entered into force, the struggle between these two paradigms have obtained unprecedented dimensions and representatives of both camps regard the other one’s views as illegitimate and they think it is exclusively their solution that would be ‘constitutional’ and consequently the other camp’s one is ‘unconstitutional. The other main hypothesis of the paper (which may be a novelty in the domestic literature) is that to the emergence of some kind of consensus between the two understandings of constitutionality a common framework of constitutional interpretation will be needed which would simultaneously pay attention to legal and political constitutionality and would not consider its own concept, full of grievances of that camp as absolute. This is to which the present paper wishes to contribute.