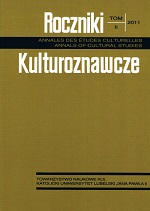 Summary/Abstract: The article aims at elucidating relations between culture and civilization. Its structure is twofold and contains the history of these two ideas before their meeting, as well as the typology of their correlation. The mutual relations between culture and civilization depend on an attitude toward the idea of human progress. While the unidirectional development of the mankind is assumed, it is possible to distinguish both positions of the actual or potential identity of culture and civilization in the respect of their content and extent (Pope John Paul II, Fukuyama), and positions of the separation, subordination or complementation of them (Kant, Weber, Maritain, Toffler, Tatarkiewicz). When the multidirectional growth of the mankind is presupposed, then there come into sight positions where civilizations integrate or accomplish cultures (Koneczny, Huntington, Braudel, Toynbee, Spengler). As the notions of culture and civilization can be used by scholars at will, the given typology inspires a respect for some traditional interpretations.