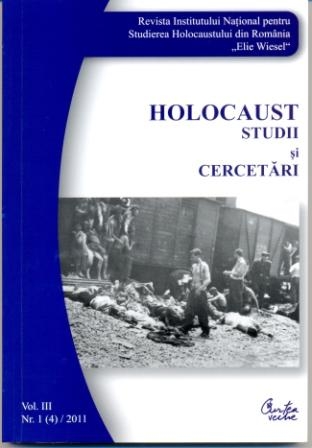 Summary/Abstract: This study of anti-Jewish policy adopted by the Antonescu regime in the Old (Romanian) Kingdom and southern Transylvania discusses characteristics of this policy in relation to both internal and external political conditions. Several stages can be identified as follows: 1) the period of the National Legionary State (September 1940 to January 1941) in which anti-Jewish legislative policy underprints the legionary terror; 2) the period following the ouster of the Legionnaries from the government (February – June 1941); 3) the period of transition to the „Final Solution” policy „à la Roumanie” after Romania joins forces with Nazi Germany (June 1941) with a concomitant policy of ethnic cleansing, evacuations and deportations to Transnistria; 4) the period of retrenchment during which changes in the power structure caused by pressure from internal and external political groups plus the initiative of Jewish community leaders resulted in the government forgoing deportations to Nazi extermination camps thus saving the majority of the Jewish population in the Old Kingdom and southern Transylvania from certain death. This study describes the basis of Antonescu`s anti-Semitic doctrine and stresses the stole responsibility of his regime for the tragedy that belfell the Romanian Jews during the Holocaust.