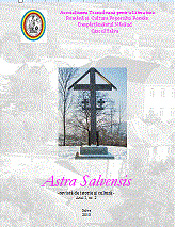 Summary/Abstract: The article presents, on the basis of oral history testimonies, documents, archives and books dedicated to this theme, the situation of the town of Salva (Bistrița-Năsăud county) during communism. The main elements which the communists had in mind during their oppression were: the purge of political opposition, made up mainly of members from the National Peasants' Party, the purge of kulaks or wealthy peasants (in Salva there were only two people who fitted within this category), and collectivization. Regarding the first procedure, the communists incarcerated their opponents; in the second case, extremely high quotations were imposed, and in the case of collectivization, the most fertile lands of the town were nationalized. However the communist plans didn’t work out as they were conceived, aspect emphasized in this study. Thus, one member of the Resistance avoided incarceration and hid for 18 years from the sight of the communist authorities, others despite their imprisonment never denied their political beliefs. In the case of those that joined the communist collectives, they boycotted its smooth operation, managing to obtain its abolition and the return of their lands in less than a decade. Regarding the kulaks or wealthy peasants, despite the obstacles, they carried on with their life. All these elements, along with other unique information comprising the contemporary history of Salva, are highlighted in this article.