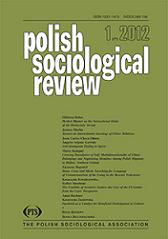 Summary/Abstract: This article examines the commemoration practices of the Gulag in the Russian Federation. On the basis of qualitative data collected during a field research carried out in a few former lager districts (the Solovetsky Islands, Komi Republic, Perm region and Kolyma), I reconstruct a way the history of Soviet repressions was uncovered from oblivion and the process of Gulag commemoration began. Starting from the assumption that the Gulag memory was not started to working through in Russia till the end of 1980s, and that the last stage of Perestroika had a crucial influence on a way the repression past is nowadays commemorated in the country, I examine several memory projects erected in that time and show how the process of reworking the Gulag experience and presenting it in a narrative form occurred. On a base of the first exhibition dedicated to the Gulag past, SLON-Solovetsky Lager Osobogo Naznachenya, (the Solovetsky Special Purpose Camp) I reconstruct a process of rewriting history and describe how the repressive past was perceived at the end of the 1980s. In turn, analyses of meaning and social function of the monuments commemorating Gulag show that at the beginning there was a diversity of the past interpretations and that the processes of the transformation of the soft into the hard memory proceed quite quickly. However, since the mid-1990 a comeback to the traditional, well recognizable model of culture is visible. Thus, the memory of Gulag supported by the Russian Orthodox Church slowly dominates the social perception of the repressive past.