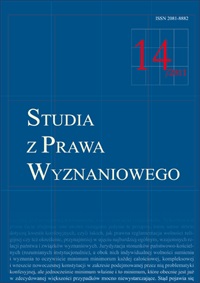 Nowelizacja ustawy o stosunku Państwa do Kościoła Ewangelicko-Augsburskiego na podstawie art. 25 ust. 5 Konstytucji RP – wewnątrzkościelne prace...
Amendment of the Act on the Relationship between State and the Lutheran Church on the Basis of Article 25(5) of the Constitution of the Republic...

Summary/Abstract: Since the enactment and entry into force of the Constitution of the Republic of Poland in 1997, there have been no amendments made to the Act of 13 May 1994 on the relationship between State and the Lutheran Church in Poland, following the constitutional procedure prescribed under of Article 25(5). The article presents the hitherto most comprehensive government's initiative of 2002 (sponsored by the Department of Religious Denominations of the Ministry of Internal Affairs and Administration) aimed to alter this, but also other religious statutes. The concept of the relationship between the act and agreement laid out in this paper is the most advantageous basis for further doctrinal debate even today. The article discusses the work of internal bodies of the Lutheran Church on this initiative, and reports on the most vital points of the "discrepancy report" in the perception of the mandatory amendments to the act. This case study shows the endeavours of one of the historically most important minority denominations in Poland to find the winning formula for regulating its relationships with the state rested on a stable and complete framework. In this context, the author outlines the "competitive," against the governmental one, concept of the agreement stipulated by Article 25(5) of the Constitution. Its author was the chairman of the Legal Committee of the Synod of the Lutheran Church in Poland. In view of the discrepancies between the churches associated in the Polish Ecumenical Council (also the Lutheran Church) and the ministerial Department of Denominations, neither in 2002 nor later were the long-awaited changes in religious legislation instituted. The article also ponders upon the amendment proposals submitted by the Lutheran Church to public authorities in the following years. Unfortunately, they did not translate into any legislative measures. In the second part of the article, the author shares editorial suggestions and substantive changes to the "Lutheran act" based on its effective application over the years 1994-2011. The article reflects the legal status as at 15 April 2011.