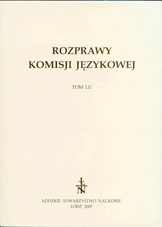 Summary/Abstract: In the article we present our observations on the peculiarities in the sphere of spelling, phonetics and grammar found in the unstudied or unknown Slavonic translations of Homilies of Ephraem Syrus, composed in Bulgaria in the 10th century. The earliest conserved copies were made in Old Rus’ and they have, besides the archaisms, innovations and dialectal forms. Considering its language forms, the most archaic is the manuscript RGADA, Sin. 38 written between 13th and 14th centures. In the article we prove its Pskov-Novgorod’s origin. The comparison of the manuscripts allows to discern early dialectal divergencies and new tendencies in the dynamism of language forms.