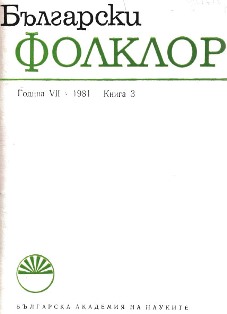 Summary/Abstract: Traces of totemism, the worship of animal ancestors and patrons can be observed in proper and tribal names, as well as in folklore. As old Magyar legends relate, the first Magyar kings descended from the relationship between the mythic bird “turul” (a kind of an eagle) and a woman (or a hind). The name of the bird as a tribal name and emblem, and also the corresponding myth have, in all probability, been borrowed from the Magyars’ southern neighbours in their land of origin – the Turki. There exist data pointing that such a cult of birds of prey (eagle, falcon) existed among the Turkic Bulgarians. The famous gold treasure of Nagyszentmiklós contains among other things two pitchers with pictures on them, which could be interpreted as depictions of episodes from the myth about the ancestor bird. Poetic variants of these latter can be found in Bulgarian folklore. They have been preserved as small epic units, images, motifs, whereas the complete legends relating of a descent from a bird have fallen away after Christianity was adopted. Some of the examples are Sekula’s appellation – “child of a falcon”, the image of a “falcon carrying a maid under its wing”, etc. It goes without saying that reminiscences of totemism could hardly be looked for in the Bulgarian folk songs recorded during the 19th and the 20th centuries. One could rather trace notions of it, which have turned into symbols.