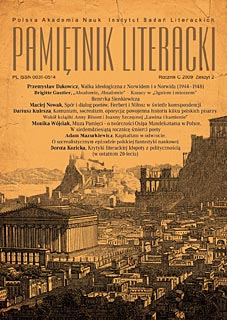 Summary/Abstract: The article is an attempt to describe the characteristics of public speech genre in its contemporary form. Statements on the matter are formulated on the basis of analysis of the famous public addresses which made history, and coming mostly 20th century, but also newer ones: John F. Kennedy, Martin L. King, Lech Wałęsa, John Paul II, Barack Obama. Genre markers of the address closely connect this type of expression with the time of speaking, place, situation, and the real audience. Moreover, the public speech is well set in the customs of today’s popular culture, especially in its media aspect. Public address can be of two different types – political, and sacral. An example of the latter is 2006 Benedict XVI’s speech in Auschwitz-Birkenau. A detailed analysis of the speech and its semiotic embedding, intertextual relationships, the position of the speaking subject, and the construction of the event being the visit of the Pope – a German – in the concentration camp allow to note that the address in question unites man’s and God’s perspectives of perception of the good, evil, suffering, and forgiveness. The construction of the speech calls up certain associations with the composition of the Ghent Altar where, as Boris Uspiensky shows, with the various plastic techniques corresponding to the stylistics of presentation in different parts of the masterpiece, two different points of view, i.e. “sacral” (of the God), and “profane” (a man’s) on reality (the world) have been inscribed. Further researches in this matter would call for a hypothesis that a specific genre feature of a particular type of expression referring to the sphere of “sacrum” regardless of the type of signs used to record it is to be considered.