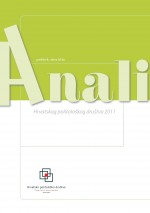 Civilno društvo i demokracija: što bi Tocqueville i Putnam vidjeli u Hrvatskoj?
Civil Society And Democracy: What Would Tocqueville And Putnam See In Croatia?

Summary/Abstract: In the contemporary political-science debates over the role of civil society in promoting democracy it is possible to distinguish several mechanisms through which civil society and its principal actors, non-governmental organisations, affect the effectiveness and quality of democratic political systems. The first part of the paper is focused on the explication of these mechanisms, and afterwards, the second part pays particular attention to one of these mechanisms. According to the authors who emphasize the significance of this mechanism, non-governmental organisations represent peculiar schools of democracy where members acquire knowledge, skills and attitudes necessary for informed and responsible participation in democratic political processes. Among modern political scientists, this function is particularly stressed in the work of the famous US political scientist Robert Putnam, and his reflections are largely based on the insights about the importance of civil society for democracy that were advanced as early as mid-nineteenth century by the French political theoretician Alexis de Tocqueville. To what extent do Tocqueville's and Putnam's insights apply to contemporary Croatia? The third and fourth part of the paper examine, by using the data collected during the scientific research project of the Faculty of Political Science implemented in 2007, how much the theses about the positive impact of membership in non-governmental organisations on generating a democratic political culture are valid in the Croatian case as well.