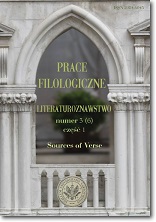 Summary/Abstract: The article addresses the sources behind the poems of Wisława Szymborska and Czesław Miłosz. The focal point of Miłosz’s poetry is the concept of Entirety, which is intertwined with his religious worldview, whereas the world in Szymborska’s poetry lacks a metaphysical structure based on a number of divine certainties. These fundamental differences are observed in the metrical decisions made as the shape of the poem becomes a test for the infinite, remaining outside reality. For both authors “the order, rhythm, form” seem to be the reasons for the existence of poetry and as such protect it from chaos and nothingness. However, Szymborska “thinks in verse” differently than Miłosz, undertaking her own “struggle with a poem”. This aspect of her work is analyzed in the article with reference to “I’m working on the world” and “Vermeer.”