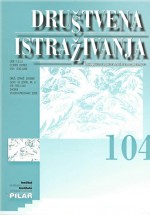 Summary/Abstract: The article's goal is to present media representation of the new regime of the Slovenian borders, introduced in December 2007. Critical discourse analysis of news items, published by all major Slovenian media between the beginning of December 2007 and the end of January 2008, reveals that there was no single homogeneous representation of the border included by all the media. Instead, there are four discourses: discourse of borderlessness, discourse of the Iron Curtain, discourse of the Schengen fortress, and discourse of everyday life problems. All discourses are fragmented, neglecting political and social contexts, but only the last one, which appeared in the regional media only, critically represented the new regime on the Schengen border. The elite Slovenian media also have thoroughly changed the dominant representation of the Slovenian borders. What used to be "an Iron Curtain" was reconfigured into "borderlessness", and what used to be "borderlessness" was reconfigured into "a fortress" and "a problematic border". They also reproduced a clear division, with Europe/Europeans and Slovenia/Slovenians on one side and the region and people behind the southern Schengen border on the other.