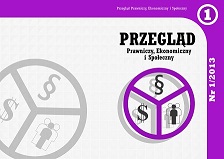 Summary/Abstract: Economic crisis, which originated in United States, has also severely influenced European countries. Recession resulted in the raise in unemployment rate, decline in standard of living, setback in GDP growth rate as well as many other problems and now implies structural reforms among many economies. The article constitutes a brief summary of origins and milestones in two most severely affected countries, Greece and Spain. Facing the possibility of Greek withdrawal of the Euro Zone, most significant reasons for crisis development as well as development of macroeconomic indicators are mentioned. Complementation of the analysis on the macroeconomic level constitutes industry approach which concentrates on wholesale of footwear and clothing. This industry, both in Greece and in Spain, has hold a significant share in country’s ware and service turnover. Some of the chosen companies’ financial indexes are discussed and followed by a brief comparison based on the examples of two most influential companies in each country. The comparison aims to highlight various trends visible in their strategies.