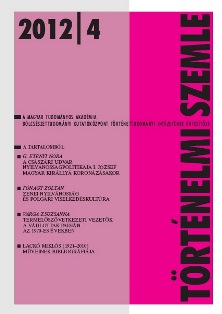 A császári udvar nyilvánosságpolitikája I. József magyar királlyá koronázásakor
The Public Policies of the Imperial Court at the Coronation of Joseph I as King of Hungary

Summary/Abstract: In the wake of the huge military, economic and diplomatic efforts which it put into the war of the reconquest, the Habsburg Empire was able to dominate Central Europe with a much greater weight than before. Before the public opinion of the Holy Roman Empire, which had traditionally played an important role in the anti-Ottoman war, the court of emperor Leopold I had to define with modern political arguments the new place of the Hungarian Kingdom and of the Transylvanian Principality in the course of the reconquest. During the long reign of Leopold I several important shifts can be grasped in the image construed of the ruler, in close connection with the modernisation of the techniques of exerting power by the imperial court. The competent elite which was active in the court was able to put to use all the means of contemporary representation without direct intentions. Official reports, accounts, yearly summaries (such as the Wienerische Staats Registratur) made tangible the effective working of the bureocratic apparatus alongside that of the army. They furnished good quality information about the military and political events to great-capacity imperial publishing houses, especially printing offices at Augsburg (Koppmayer) and Nuremberg (Felsecker, Endter, Loschge). After the siege of Vienna the role of Viennese editors and engravers (Voigt, Cosmerovius, Lerch, Nypoort) also increased conspicuously in the communication of fresh news. About the Hungarian coronation of Joseph I, which took place at the diet of Pressburg in 1687, more printed descriptions and illustrated accounts were published than ever before. The diversity in genres of the contemporary prints which were issued to commemorate the coronation and to greet the young ruler is also unique. Printed weekly journals and manuscript papers in German, Italian and Latin reported on the key events of the diet. Separate reports on the coronation were published, which mediated every single detail of the coronation ceremony in a way sensible to symbolic meaning to a public which was “receptive to spectacles”. Concordances between reports from Nuremberg, a leaflet published in Antwerp, and a Portuguese manuscript source hint at the existence of a common source, a report made public officially. The prints represent the hereditary kingship of the Habsburgs, but at the same time manifest the value of the Hungarian Kingdom and the political importance of the Hungarian high dignitaries. Contemporary leaflets conceive the tender age of the heir to the throne, Joseph, as a virtue, the symbol of a future that would bring peace. The pictorial propaganda of palatine Pál Esterházy likewise advertises the new compromise, a cooperation without conflicts between the future ruler and the Hungarian estates. The manuscript and published reports which arrived to the imperial assembly of Regensburg about the coronation at Pressburg in 1687 reflect a multiple propaganda representing ve