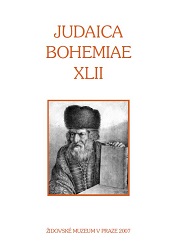 Summary/Abstract: Translation by S. Hattersley To date, little has been written about the Hebrew censor and Custodian of the Prague University Library Karl Fischer, and information about his life has generally been limited to basic biographical data. The most detailed account of Fischer so far has appeared in Emanuel Baumgarten’s four-page preface to his Gutmeinung über den Talmud der Hebräer [Testimonial on the Talmud of the Hebrews]. Subsequent writers have drawn on the latter text for basic information but have not focused on Fischer as a separate object of interest. Brief references to Fischer can be found only in broadly conceived expositions on the history of the Prague University Library or on Hebrew censorship. Constituting the first attempt at a comprehensive assessment of Fischer’s personality, a recently published book by I. Cermanová and J. Marek explores in detail Fischer’s life and work as a librarian and censor and also contains a complete list of his written legacy.