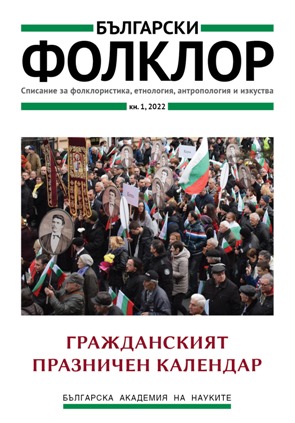 Summary/Abstract: In my article, I analyse the newspaper imprints of some jubilee celebrations performed in the minds of Russian émigrés in Bulgaria, but also outdoors and indoors, between 1919 and 1944. Basing on M. Spariosu’s theory of exilic-utopian imagination and on the intuitive premise that an émigré community would inevitably pursue/problematize its accommodation within the host society, I locate the Russian émigré community and its celebrations within a tri-axial communicative situation whereby impulses for (self-aggrandising) introspection, mental war with the exiling power (sovietised Russia), and domestication of the host milieu are detectable. Considering newspapers as the most effective sites to host places of celebration for a (non-persecuted) ethno-cultural minority in the first half of the 20th c., and basing on prior historiography on the Russian émigrés of Bulgaria and on an overview of their periodicals, I identify as most conspicuous a constellation of jubilees that gravitated around the 50th anniversary from both the beginning and the completion of the 1877–1878 Russian-Ottoman war. Thus, I am able to discern the specificity of the communicative situation of that particular Russian émigré community against the benchmark of the ‘metropolitan’ one based in Paris. I approach these “imprints”, or “places of celebration”, as visual-verbal compositions (elaborating D. Georgiev’s ‘architecturology’ of newspaper); and as textualised experiences potentially reminiscent of the two cultural archetypes of “jubilee” for (post)Christian humankind, the Hebraic and the Roman ones.