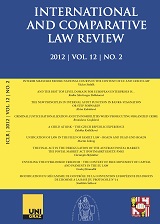 Summary/Abstract: In the European legal policy an all-embracing unification in the field of family law is oftentimes considered as desirable. On a comparative law basis a “Commission on European Familiy Law“ (CEFL)“, composed of numerous professors from all over Europe, is compiling the so called “Principles of European Family Law” (Principles) since 2001. In the fields “Divorce and Maintenance Between Former Spouses“ and “Parental Responsibilities“ these Principles exist already, whereas the work on “Property Relations Between Spouses“ is still in progress.