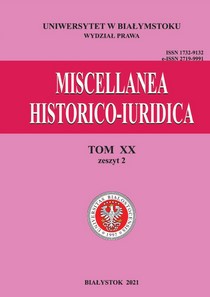 Summary/Abstract: The Kingdom of Serbs, Croats, and Slovenes was created on December 1, 1918 by proclamation of Regent Alexander I Karadjordjevic. The most important step regarding the organization of the newly formed state was the adoption of the constitution. The first constitution of the newly formed state was adopted on June 28, 1921, and in science it is usually called the Vidovdan Constitution. Due to a series of internal problems, on January 6, 1929, the king suspended the Vidovdan Constitution, dissolved the assembly and banned the work of political parties, and justified the coup by the highest national and state interests. The transition to an open dictatorship did not solve any of the political, economic, or national problems that led to the crisis. Despite the fact that the king announced his return to the constitutional order as soon as possible, this would happen only after two years. With the enactment of the constitution on September 3, 1931, there was no democratization of Yugoslav society, but the king’s open dictatorship was replaced by a constitutional one. The existence of the Kingdom of Serbs, Croats, and Slovenes/Yugoslavia in the period 1918–1941 in a political sense, was marked by the changes of a covert and open dictatorship, whereby the proclaimed democratic rights and freedoms represented only a show for the public. Through the paper, the author will analyze those constitutional provisions and the king’s actions that indicate this.