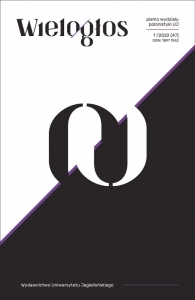 Summary/Abstract: This article sheds new light on Konrad Góra’s Nie (2016), analysing it through the lens of sound studies. It opposes the common perception of the poetic volume as a voice representing the minorities in politically involved poetry. Instead, it proposes an interpretation of the work in the perspective of voice par excellence, which does not subordinate to speech and exists primarily in its bodily, phonic shape. The point of departure is, firstly: recognizing that Nie subsists in intermedia endeavours, which emphasize the significance of phonetic voice comprehension, secondly: underlining the fact that the poetic volume opens with a version of a tale by Jiří Kolář, which serves as an oral code to the entire work. The interpretation put forward in the article presents a new understanding of the notion of involvement in poetry, which does not consist in the representation of the Other but in his embodiment as an independent voice in the text.