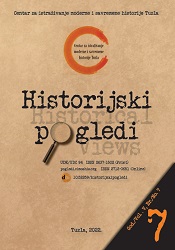 Summary/Abstract: In her paper, the author presents an analysis of the debate on „mixed marriages" initiated in June 1994 by Džemaludin Latić, editor-in-chief of the Bosniak national weekly Ljiljan. The research focus of the paper, however, is not on „mixed marriages" as a „phenomenon of socialist past "but on discourse in Ljiljan as a linguistically constructed social reality/past that is produced through discussion. That discourse aimed at creating a new narrative and ideological basis far group bonding, i. e. at completing the process of national homogenization. Media elite gathered around Ljiljan was part of the Bosniak political elite - that emerged during the „ democratization " period in the late 1980s and early 1990s - which shaped political paradigm of „ the new ethnonational order " and in that sense Ljiljan represented „ideological apparatus" of post-socialist political and social power structures. Main feature of the discourse produced in Ljiljan, through the bitter dispute with Oslobodjenje, newspaper which narratively and ideologically shaped reality in the socialist period, was dramatic revision and simplified stigmatic presentation of the socialist past, victimization of Bosniak nation, and stigmatic collective categorizations of Others. Discussion in Ljiljan was aimed at defining and pointing at both the external and internal enemy of the Bosniak nation, with the latter being represented by those who were considered to be the carriers of the ideological values of the overthrown socialist system. They were to be isolated within the new political order, silenced and pushed towards the social margins, and the values from the social past were re-evalueted and proclaimed to be lie and illusion. Thus, the Interna! Others included m embers of „mixed marriages" who, with their „multicultural" matrimonial association, were perceived as the ones that violated symbolic boundaries of traditional Islamic collective identity. The Serbs were, on the other hand, defined as the main External Other, and this collective categorization included even those who remained 1992-1995 in besieged Sarajevo, and they were, as well, equated with Chetniks and Communists through discussion in Ljiljan. it is important to stress that the debate in Ljiljan was marked by strong ideological repulsion toward the secularism and civic conceptions, especially European secularism, which relied on the Christian cultural tradition as hegemonic. Source of the hostility and animosity far the main political and social protagonists of the recent socialist past was in the personal traumatic experience of the Young Muslim Group, since 1 990 new political elite, which went through the rigged Sarajevo process in 1983, as well as in their ideological repulsion toward the modernization and secularization processes of transformation through which Bosniaks and Bosniak family passed during socialist period. Since the debate erupted in the war year 1994, which was preceded by dense period of brutal violence, concentration camps, mass rapes, and the passivity of European diplomacy towards all these horrific happenings, the author believes that all mentioned contributed to the radicalization of discourse in the national media and that, also, suffered violence was misused by the media and new political elite in order to complete the process of homogenization of the Bosniak collective on the basis of the exclusive ideology of „cultural fundamentalism". The author also shows that Džemaludin Latić, Ljiljan's editor-in-chief, tried to use the discussion to encourage the restoration of institutional power and control of the Islamic Community over the matrimonial union of members of national and cultural collective. Namely, within the patriarchal discourse in Ljiljan, the „monocultural matrimonial union" was perceived as a framework within which the Bosniak national society should be revived and renewed on the basis of Islamic traditional and cultural principles. Within the private sphere, woman as mother played a key role in the process of primary socialization and therefore the focus of a significant part of the discussion within Ljiljan was on her body and life and her responsibility far the postwar biological and cultural revival of the collective. Therefore, the ban on mixed marriages applied primarily to her, Bosniak/Muslim woman. This in fact presented a biopolitical strategy that stood behind the discussion, focused on the bare lives of national subjects, ie. on their subjectivization and socialization within the new political order. Political and social protagonists of that order wanted to ensure „ valid " biological, cultural and ideological reproduction of the new political system and therefore permanent legitimacy of their political, social and economic power. This could be achieved only by directing collective identity self-understanding of national subjects through the monoperspective culture of remembrance and through their social and cultural practices.