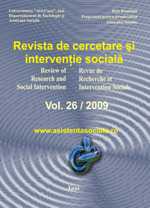 Summary/Abstract: The bullying is one of the most frequent forms of school violence which affects about one third of the students’ population. Within the present paper, we wanted to present a short synthesis regarding the stage of the researches from the area by first analyzing the prevalence of the school violence and the existing differences according to variables like age and sex. Then, we proposed a conceptual clarification starting from the most well-known definitions and we described the main forms of bullying: physical, verbal and relational. Also, we presented the psychological profile of the bully and of the victim, the way in which they are perceived by their mates and the main consequences of victimization. Within the last part, we described the most frequently used actions for the diminution of the school violence, based on the suggestions made by different authors and that can be found in the majority of the mainly used intervention programs. In the end, we presented the situation in Romania regarding the main scientific researches made until now, as well as the strategy elaborated by the Romanian officials for the combating and prevention of the school violence.