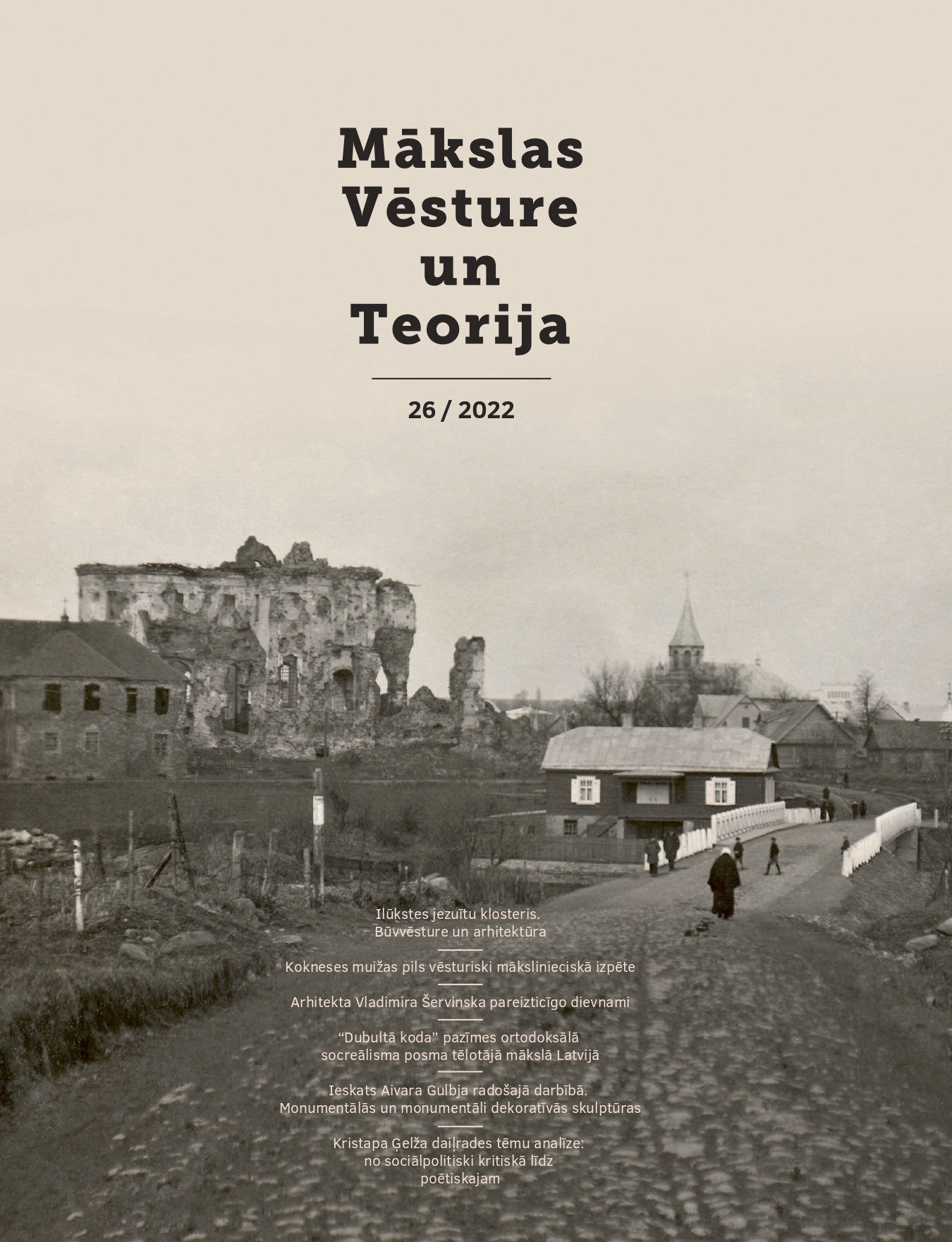 Summary/Abstract: The phases of orthodox Socialist Realism art in Latvia (1940 –1941, 1945–1956) are already researched and interpreted in many publications of Latvian art historians (Ilze Konstante, Stella Pelše, Elita Ansone, Sergejs Kruks, et al.). They reveal the robust suppression of local art life by the totalitarian regime during the Soviet occupation, the force of the ideological pressure on artists and describe the considerable body of artworks named Socialist Realism. Tracing the process, an impression of irresistible dominance of this production could arise. Nevertheless, in order to be more realistic, some hidden deviations from the official art policy and canonic requirements of Socialist Realism should be indicated. They emerged already during the first year of Soviet rule as a difference between published conformity and presented artworks, as a specific duality of iconography and its connotations or as a dichotomy between required subject matter and formal style. The double codes of art life of Latvia continued after the Second World War, when artists had to adapt themselves once more to the cultural policies of the totalitarian state. In most cases the reason for it was quite pragmatic because the state institutions were the main art consumers. The prescribed themes for art production were given together with the dogma of Socialist Realism and examples to be followed. For all that, in the course of the first post-war years artists managed to escape in the realm of politically neutral genres and images; landscapes dominated exhibitions, the legitimate and desirable compositions with images of the so-called working people (labourers, farmers) were made according to the tradition of the 1930s without unquestionable features of Soviet life (paintings of Eduards Kalniņš, Ārijs Skride, Jānis Liepiņš, Ģederts Eliass). The same could be said about some graduation works of the Latvian Art Academy of the time. A historical scene “The Kauguri Rebellions” (1945, Riga, Latvian National Museum of Art, further LNMA), painted by the former prominent modernist Oto Skulme, was an ideologically required depiction of the class struggle; on the other hand, it could be read as an anticipation of the national liberation. The picturesque style of the work was far from mimetic Socialist Realism. Versions of “Entangled” (all in the LNMA) modelled by the leading sculptor Teodors Zaļkalns could tell us about artist’s dependence on the changing political powers. The ideological pressure on Latvian art increased from 1949 until the middle of the 1950s; the historical background contains brutal repression, deportations and includes individual stories of deported artists. The result of the growing engagement and conformity – many works of Latvian orthodox Socialist Realism with all the necessary elements of the current policy. The largest exhibitions of 1949 and 1950 were full of artefacts with demanded subjects; painted and sculpted images of the dictator Stalin were inevitable. The most notable examples (the works of Oto Skulme, Arnolds Pankoks, Ojārs Ābols, Semjons Gelbergs, Aleksandra Briede, Jānis Briedis and others) were already examined in Soviet times and in recent publications. Still, the hidden double-coded art life was not totally exhausted. Thematic escapism gradually recovered and already in 1953 landscapes dominated the representative exhibition of Latvian creative artists in Riga once more. In 1954 the official art critic Arturs Lapiņš “unmasked” painters who worked with “two easels” – one for commissioned Socialist Realism works and the other for individual formalism. The dichotomy of subject and form was also preserved. Some artists from the older generation (the aforementioned Eliass and Zaļkalns, graphic artist Pēteris Upītis, et al.) continued to produce works repeating their pre-Soviet style and supplying them with titles typical for Socialist Realism. The youngest generation (students of the Art Academy) acquired another double-coded concept. Painters, who composed conventional scenes with farmers’ work or with happy children, had to create the obligatory optimistic mood not only by postures and facial expressions but also by sunlight effects. Therefore, volumes were modelled using colours dependent on the light of plein air. The role of brushwork increased. Sometimes elementary narratives were reduced to the simple fixation of depicted figures and their dynamics. This development towards Impressionism resulted in a mutation of Socialist Realism and could be called “Sots Impressionism”. Historical Impressionism was rejected by the authorities of the orthodox Socialist Realism, nevertheless, its elements were integrated into some individual versions of the style, including the achievements of some leading Soviet representatives of it (Yuri Pimenov, Arkady Plastov, Tatyana Yablonskaya). The overall phenomenon has recently become a subject for art historians; Vern Swanson praised “Soviet Impressionism” in his monographs of 2001 and 2007, Eha Komissarov staged an exhibition of “Stalinist Impressionism” in Estonian art (Tallin, 2016). In Latvia two graduation works of Art Academy students Bruno Celmiņš and Zigurds Kampars are good examples of “Sots Impressionism” (both 1954, LNMA), the best was an urban plein air scene “At a Book Table” (1955, Latvian Art Academy) by Gunārs Cīlītis. The trend continued in the next years (notable the paintings of Edgars Iltners, Rita Valnere, et al.) during the so-called political “thaw” and led to further mutations of local Socialist Realism.