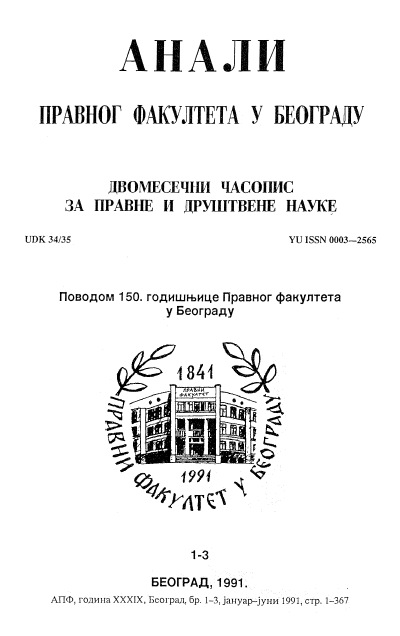 Summary/Abstract: Normative nature of law should be identified with the normativism in the sphere of law. The normative character of law is a basic characteristic of law which emanates out of its very essence as thinking, out of the collection of notions of compulsory behviour of people. The law, namely the legal norm, is a spiritual, ideal phenomenon which expresses something which does exist as something which should be existing. The norm does not exist only because it is valid, but it does so as an expression af that which is necesary. Along these lines, legal norm is an ideal phenomenon off the limits of time and space, and the one which exists in the real world in the spirit (mind) of people or in the linguistic symbols. It means that the normative nature of law originates out of the reality, and first of all out of the social facts, which cannot replace the norm as a spiritual phenomenon. To a certain sense the normative character of law may be considered as a form of law, as distinguished from its contents (the substance of legal institutes) as the matter, because die legal norm is distinguished from other types of norms by its formal character and dependence on state compulsion, which is expressed in the form of sanction against its being not implemented. The formal character itself, on the other hand, means tliat the law determines in an exact way how do legal norms originate, as well as when they cease to exist as such. The normative nature, in other words, does exist even if one and only one norm is applied to one and only case - if such norm really exists.