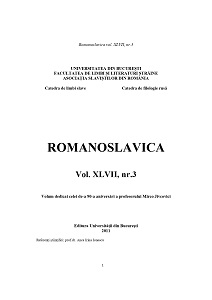 Summary/Abstract: In the two existing surveys of Serbian periodicals issued on the present territory of Romania – the all-embracing one, from 1976, due to Mirco Jivcovici, and the literary one, from 1993, due to Spasoje Grahovac, confined to the XIX century), three periodicals have been omitted: one of the Serbian Orthodox Bishopric of Timişoara, from the beginning of the XX century (1910-1919), issued in Timişoara; one from the inter-war period, informative in character („Nedeljne novosti”), issued in Variaş, Timiş county (1930); and a post-war one, markedly political („Pod zastavom internacionalizma”), issued in Bucharest (1949-1954) by political refugees from Yougoslavia. The paper describes these periodicals, pointing out for each of them the motivation of establishment, the place of printing (with a mention of the printing house involved), the format and the print run, the editorial staff and the location of its office, the professed programme, the contributors, the content, and the circumstances of cessation of appearance.