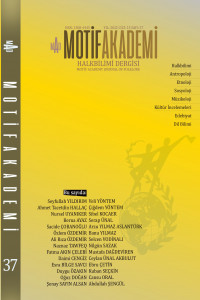 Summary/Abstract: Physical characterization in written works are external indicators associated with content. Many features of the structure such as the number of lines and columns of the written work, the special markings of the manuscript, the font, the paper, the volume, the appearance, the numbering of the leaves, the title of the book, the ink, the place where the book was written, its history, the name of the author/copyer, illustration of the book, etc.; supporting the subject discussed in the work and expressing its context and order. The term cönk is first a concept related to the appearance of the book. The texts inside cönk are the reason for its existence. With its structure, content and context features, cönks are a means of disseminating and preserving information that contributes to the history of culture. In the study, 06 Mil Yz Cönk is registered at number 25 in the National Library Manuscripts Collection; In order to contribute to the text studies, the order in the folk books written to be explained was emphasized and at the end of the study, a transcription translation of the poetry texts on The Reaper and the Arab Pilgrim's Parable and The Advice was given. The aim of the study is to; although it usually does not have a standard in itself in matters related to copy characteristics such as measurement, unity, number of lines, etc. in folk books, which can also be expressed as "irregular" and written to be explained; to assess that it is not brought together completely indiscriminately. The writing works, which are described as folk types and created to tell stories, have a pattern within themselves according to their context and functions. In this context, cönks; structure, content and context features will be examined from the "Inscriptive" point of view. With this work, folk-type texts contained in manuscripts and organized for narrative are put together for a specific purpose; In the issue of classification of folk texts, it was intended to emphasize the necessity of taking into account the characteristics of the binding.