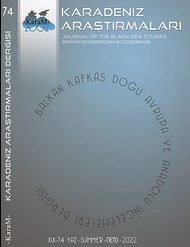 Summary/Abstract: The Jumjumanama of the Khwarezm Turkish period was published in 2020 as a joint publication of Mustafa Toker and Muhsin Uygun. Four copies were used in the publication, two in S. Petersburg and two in Kazan. As a result of our research we have done in the intervening two years, we have found 6 more copies of Jumjumanama in Kazan libraries. Two of these copies are complete, one is incomplete in the end and three are fairly incomplete. The aim of this article is to introduce these newly found copies and to ensure that some parts that disrupt the rhythm and rhyme in the copies used in the publication are corrected with the help of these newly found copies. In the copies, it is seen that there are rhythm mistakes in some verses and problems with rhyme in others. According to the statements of the authors, some of these defects were corrected based on the other copies used in the publication, and some of them were left as they were without any intervention, since they were the same in all copies. In this article, firstly, these newly found copies were introduced, and then, starting from the new copies, tried to eliminate the rhythm and rhyme errors found in other copies and reflected in the publication.