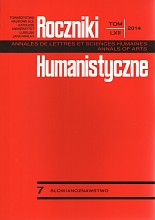 Summary/Abstract: The University in Lublin was the first institution of higher education, which was created in Poland after restoration of independence. In first period of its existing the Catholic University of Lublin owes a lot to Saint Petersburg – unique atmosphere of the city, which allowed the freed circulation of ideas between the representatives of different confessions and nationalities and the scientists, who were educated here. The paper describes the circumstance of establishing the first confessional university in Poland, persons of its founders and the moments, which connect the Catholic University of Lublin with the capital of Russian Empire.