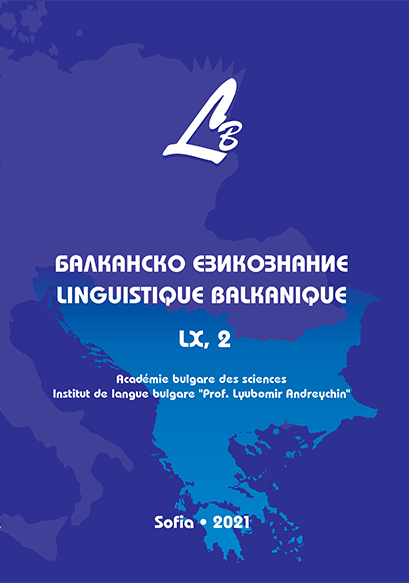 Summary/Abstract: Based on the authors’ fieldwork, the aim of the study is to find out the degree of penetration of Bulgarian loanwords (along with loanwords from other languages) into the terminology for clothing worn by the Vlach-Tsaran people (in the territory of the communities of Zaječar (Zaječar district), Negotin and Kladovo (Bor district), i.e. in such historical areas as Timokska Krajina, Negotinska Krajina, and Ključ; they live in the neighboring regions of northwestern Bulgaria – in the Vidin region (the communities of Vidin, Bregovo and Boinitsa). To solve this problem, ethnological and linguistic materials are used. The wide usage of archaisms, Slavisms, words without a clear inner form (regionalisms), transformation of the meanings of lexical units, and assimilation of lexical borrowings from the modern Serbian language are typical for the vocabulary of the Tsaran dialect. Almost every Vlach village has formed its own version of traditional costume (while preserving the general type of the costume complex characteristic for all Vlachs in the area studied). The variety of folk dress has predetermined a considerable variability of terminology: in separate cases in the neighbouring settlements, not only could the same costume element be called differently, but one nomination could denote completely different realities. Among the names of clothing elements, obvious borrowings from Bulgarian are terms such as pistélcă or pristélcă ̔apronʼ, vấlnic ̔woman’s loose-fitting waistwearʼ, propoádă or broboádă ̔long headscarfʼ. Other terms of Slavonic origin are also recorded: ciupág (ciupágu, ciupáge, ciupágili), n., ̔the upper part of a shirt, blouseʼ; poálă (poála, poále, poálili), f., (usually in the plural - poále) ̔lower (separate) part of the shirtʼ, ̔ lower skirtʼ; súcnă (súcna, sucne, sucnili), f., recorded in the village of Bukovce in Negotin region, is used here to mean “skirt” or, less commonly, “traditional unmade women’s waistwear”.Based on the results of the research, it can be said that the distinctive feature of the Vlach-Tsaran dialect is that it has a number of denotative loanwords from Bulgarian and that some Turkisms appeared in it through Bulgarian, and not Serbian, as in the Banat cf. e.g. dialects (Olten. chébă and Banat. cébă and şébă; Olten. Chiúrc, and Banat. ciúrc).