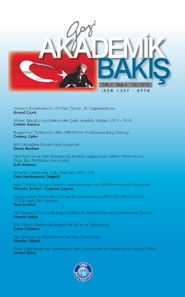 Summary/Abstract: Serious scientific studies and previously undisclosed archive documents have been published in Bulgaria recently. These publications prepared on the basis of oppression and assimilation contain highly important information in terms of clarifying the forced or ìvoluntaryî migrations of the Turkish and Muslim populations and the resistance shown by the Bulgarian Turks against the oppression applied. The Bulgarian authorities, who wish to decrease the number of the Turkish population constantly, have never given up the idea of forced assimilation and the forced migration to expel this population they considered dangerous. In this paper, in light of archive documents and sources, the struggle of the Turks in Bulgaria during the 1984-1989 period against the melting pot policy has been emphasized.