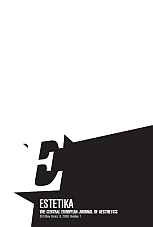 Summary/Abstract: The true importance of the role of the interpretation of art in Hegel’s later thinking is understandable only now, after the publication of the almost original version of the lectures on aesthetics. This article aims to highlight a usually neglected reading of Hegelian aesthetics, namely its Vergangenheitscharakter. The starting point for this is a thesis of Hegel’s: ‘What is alive is beautiful, in so far as the soul becomes apparent in it.’It is ‘not yet sufficient’, yet it is true that in its endless approximation to a spiritually real ‘doubling of the Idea’it aims at something indefinite, or, rather, we are, with a work of art, in an unreal place or in a place where things are continuously changeable. The work of art entered into a time of art and history, which requires interpretation, whereby the ever- ‘changeable appearance of the Beautiful’ is manifested in the work of art itself. Its being alive accepts being threatened only by its conceptual/illusory appearance.