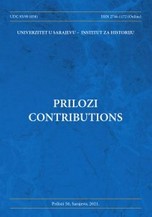 Summary/Abstract: The Ottoman Cemetery in Malta, constructed in 1874, represents a monumental complex which involves a mausoleum erected in honor of soldiers who laid their lives during the siege of Malta in 1565, and graves of Turkish soldiers who died during World War I, and a significant part of Ottoman cultural heritage in the Mediterranean. Built on the initiative of the Sultan Abdulaziz, the Ottoman cemetery in Malta does not represent the only architectural monument of the Ottoman provenance, but it is the only complex that represents a part of Ottoman cultural heritage and a testimony to the cultural identity of Ottomans in this part of Europe. This paper aims to indicate the necessity of preservation of the Ottoman immovable cultural heritage within the Islamic heritage, to accent the importance of memorial culture which is an integral part of the identity of Ottomans, but also Muslims. This study also deals with the history of the cemetery origin and basic architectural characteristics of the complex, so it provides an overview of the Ottoman memorial culture. Besides illustrations, this work contains the transliteration of inscriptions of the central monument dedicated to the soldiers who gave their lives in World War I, and the translation of the inscriptions into Serbian. The paper is a result of the field research, but also of implementation of an interdisciplinary approach to the subject, use of primary historical sources preserved in the National Archives of Malta, transliteration and translation of monument inscriptions, and relevant literature.