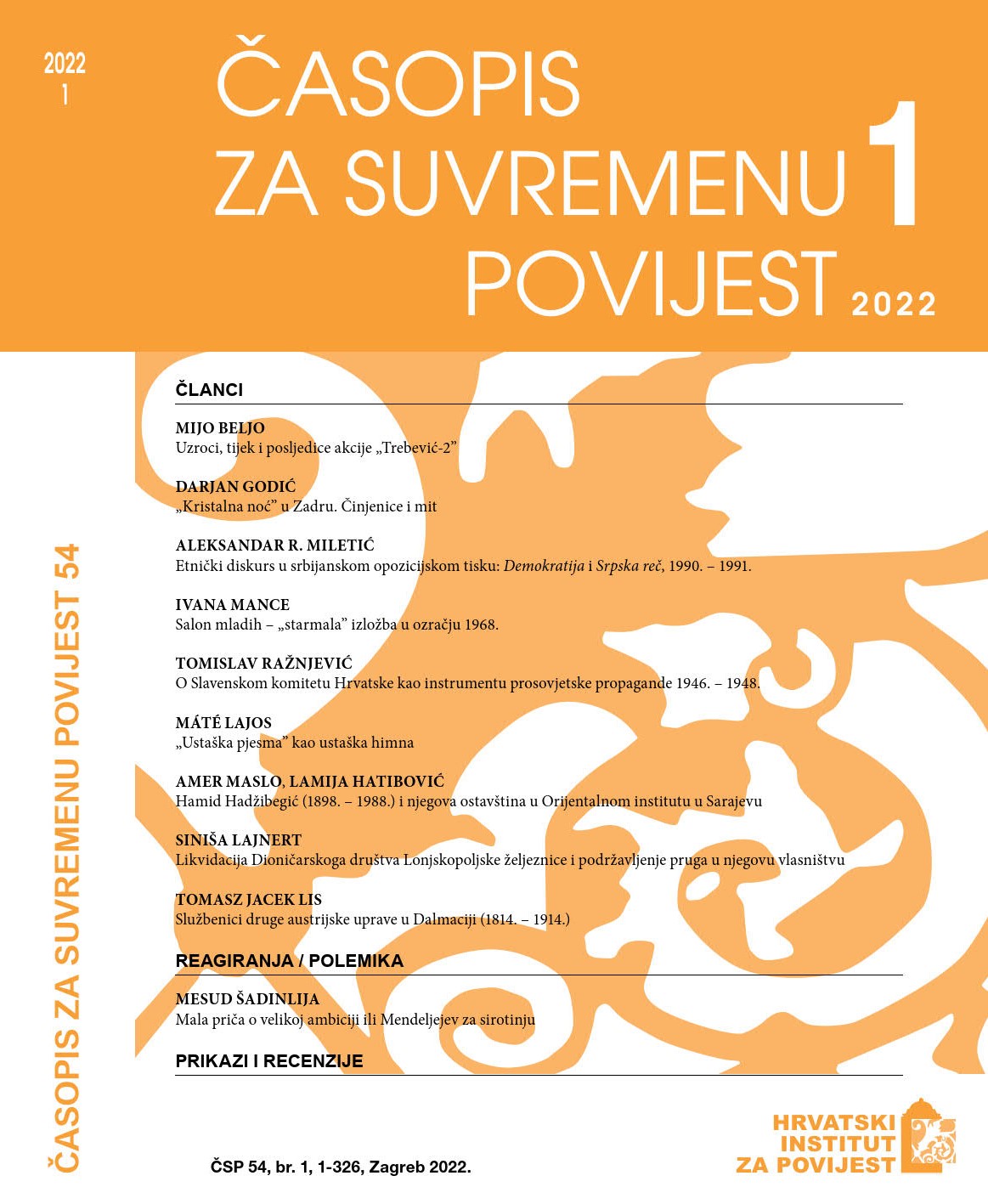 Summary/Abstract: On 2 May 1991, Serbian property in Zadar and its surrounding area came under attack. The attacks took place after months of tensions between Croats and Serbs, and later became known as the ‘Night of Broken Glass’. These tensions were the direct consequence of the Serbian armed rebellion that erupted in northern Dalmatia, Lika, and the hinterland of Zadar in August 1991. The public security system that met the rebellion was created in January 1990, when the Secretariat of the Interior for the area of the Benkovac, Biograd na Moru, Obrovac, Pag, and Zadar municipalities was established in Zadar. In this area, Croats were an absolute majority in the Biograd na Moru and Zadar municipalities, and the Serbs in the Benkovac and Obrovac municipalities. The rebellion prompted divisions not only among the population, but also among the police. By January 1991, most policemen of Serbian nationality had left the Zadar police force and joined the rebels. Despite being weakened in terms of manpower, the Zadar police for the most part managed to successfully preserve public safety. The security situation worsened after a skirmish between Croatian police and rebel Serbs at the Plitvice Lakes on 31 March 1991. A significant increase in shootings, setting of bombs, road blockades, and other forms of criminal activity, mostly nationally motivated, was recorded. In addition to the rebel Serbs, the instability was caused by the Yugoslav People’s Army (YPA), which deployed its forces in Zadar’s hinterland in early April 1991, causing alarm among the Croatian population. This deployment was part of a broader plan through which the YPA sought to set up a ‘buffer zone’ in order to close off the areas held by rebel Serbs and prevent the Croatian police from interfering. On 2 May 1991, the security situation throughout Croatia, and therefore in the area under the jurisdiction of the Zadar police, collapsed. Serb rebels killed 12 Croatian policemen in Borovo Selo near Vukovar, and severely wounded Zadar policeman Franko Lisica in Polača near Biograd na Moru; he soon died of his wounds. Despite the Croatian authorities’ calls for peace, spontaneous unrest erupted throughout Croatia, and Serbian property and companies were attacked. Furthermore, there were incidents involving the YPA. The mood of the Croatian population in Zadar after the murder of the policeman Lisica was similar to that in other parts of Croatia. Despite the municipal authorities’ calls for peace and their organising of a peaceful protest march, various uncoordinated groups demolished and plundered Serbian property on 2 May. The Zadar police failed to stop them because most of the policemen were engaged in the area affected by the Serb rebellion, while others were busy protecting the residential buildings in Zadar in which members of the YPA and their families resided. Soon, due to a feeling of insecurity, a mass exodus of Serbs from Zadar took place; these Serbs took refuge in the areas occupied by the rebels. Apart from the Zadar Serbs, Croats in the areas held by Serb rebels also began to leave their homes in early May 1991. On 1 May 1991, rebel Serbs drove many Croats from the areas around Knin. On the night of 6 to 7 May, as an act of revenge for the events in Zadar, the property of Croats, Albanians, and Croatian companies was attacked and plundered. Different sources give different data regarding the extent of the damage caused to Serbian property. Criminal charges raised by the Croatian police against unknown perpetrators on 2 May 1991 mention that 175 catering establishments, commercial premises, stands, kiosks, and automobiles were damaged. Apart from the property of Serbs, property belonging to Croats, Muslims, Roma, and Croatian companies was also damaged. There are numerous prejudices and controversies regarding the ‘Night of Broken Glass’, which mostly ignore the then security-political context. Certainly, there were those among the Croats who did not consider the attacks on Serbian property and their exodus from Zadar as anything controversial, but available sources clearly point towards the conclusion that the destruction of Serbian property was not organised and was not a part of the policy of the Croatian leadership.