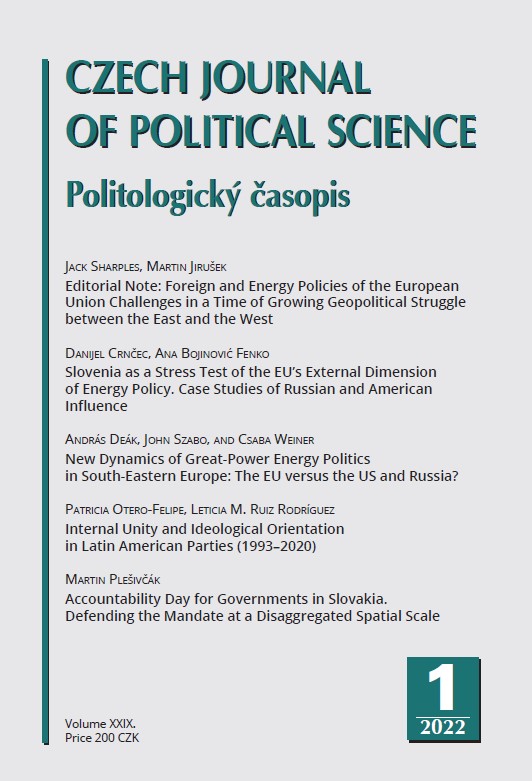 Defending the Mandate at a Disaggregated Spatial Scale

Summary/Abstract: The aim of the article is to review the issue of performance voting in Slovakia on the national level but especially on the level of individual regions and districts. For this purpose, an ex-post index of government support is used. This indicator expresses the measure of growth or decline in a government’s (governing parties’) electoral support in parliamentary elections at the end of its functional period in comparison with its start, while also taking into consideration election turnout in the given elections. Governments in the period 2002–2020 are analyzed. In none of the five cases did the government manage to achieve a more favourable result at the end of its mandate than at the beginning. Government support on all levels showed a dramatic decline over time, particularly after 2010. An interesting finding is that on the sub-state level, while considering election turnout, differences in the evaluation of governments’ performance during their term were not, on average, particularly significant between districts. When evaluating the measure of government support, we can on the level of regions and districts talk about a moderately large to large decline in election support for the individual governments (with the exception of the 2006–2010 government). While in the first decade of the new millennium, economic reforms and the state of the economy played a key role in the reckoning for the government, after 2010 more specific political events defined by differences in values between governing parties, scandals or simply the need for change due to ‘material fatigue’ were behind the changes in government. In these cases, a great deal depended above all on the measure of party self-identification. The study showed that spatially disaggregated parts of the country (regions and districts) are similarly sensitive to these stimuli when compared to one another.