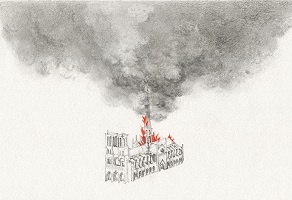 Summary/Abstract: This letter is a response by Dominika Macocha to the discussion between Elżbieta Janicka, Konrad Matyjaszek, Xawery Stańczyk, Katrin Stoll and Anna Zawadzka about her video-sculptural installation work “50°31’29.7”N 22°46’39.1”E, 50°30’56.2”N 22°46’01.0”E, 50°30’41.0”N 22°45’49.5”E” published in Studia Litteraria et Historica 9 (2020). The discussion has enabled the artist to look at her work from a new perspective, to reflect on it in a critical way and to clarify central issues raised by the discussants. The letter is a testimony to the artist’s engagement with the local community which until today lives in the shadow of those Poles who, on their own initiative, murdered Jews during the Shoah. Macocha reveals the current efforts undertaken by several actors, among them the community of Bilgoraj, to cover up the historical fact of the murder of Jews carried out by members of the local population. The letter closes with a reflection on the responsibility of the artist in view of the fact that a revolution of the symbolic system has not yet occurred.