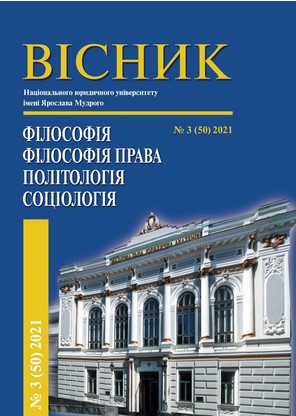 УКРАЇНА ПЕРЕД ВИКЛИКАМИ ХХІ ст.
UKRAINE BEFORE THE CHALLENGES OF THE 21ST CENTURY

Summary/Abstract: The 21st century has given humanity, including Ukraine, a huge number of challenges that need to be answered. To understand the range of threats and trends in the development of the world community is the most important task for humanity. The modern world is usually characterized by epithets of «crisis», «turbulent», «unstable». These characteristics are undoubtedly true. But they are not exhaustive. Apparently, with even more reason, the world can be called dynamic, complicated and increasingly dangerous. In the struggle for the future that unfolds on the planet, risks are growing and threats are increasing. To the Davos Forum in 2017, a report was published on the global risks awaiting humanity in the near future. In total, experts identified 30 global risks, as well as 13 trends that can strengthen them or change the relationship between them. Risks are divided into five categories: economic, environmental, geopolitical, social and technological. In ten of the most probable risks in 2017 – three of the areas of ecology and three of the geopolitics, while the environmental is higher: two of them are among the top 3 global risks. These are extreme weather events and large-scale natural disasters. The top ten included also the risks of anthropogenic environmental disasters. The second most significant category of risks is geopolitics. Among them, the most dangerous are large-scale terrorist acts, followed by interstate conflicts and inefficient state administration. They include a one-way approach to solving international issues instead of the necessary collective efforts of the world community. In addition, countries are openly accusing each other of interfering in their internal affairs. It should be emphasized that global risks do not exist separately from each other, but tend to generate each other, overlay, turning into the most powerful destructive cascades of threats. Most experts believe that, for the first time since the late 1980’s, a trigger for such a “domino of risks”, capable of launching destructive processes of global destruction, may become one or another armed conflict, initially local, but those that are increasingly drawn into their funnel the number of states and non-state entities. It is noted that at present, in essence, there are no well-established procedures for preventing the escalation of such armed conflicts and their escalation into a global conflict. In the third place – the technological risks: fraud or personal data or theft, which have reached «unprecedented scale». Among the most likely technological risks of the next decade, experts called large-scale cyber attacks (sixth in the top ten). They also agree that in the coming years the destructive impact of technology on non-productive sectors of the economy will only intensify: the rapid development of robotics, sensors and machine learning will crowd out the human work of the service sector. Among the trends that can aggravate global risks or change the relationship between them, experts included: aging population, changes in the role of international structures (UN, IMF, NATO), climate change, environmental degradation, middle class growth in developing economies, strengthening of nationally oriented sentiments, deepening polarization of society, etc.