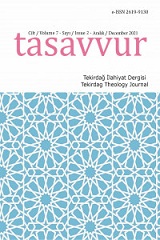 Summary/Abstract: Sunni legal theorists [uṣūlists] have adressed that if the k̲h̲abar al-wāḥid is sound, it will be a proof and the acting with it will be wajib. In the Shiiteuṣūlî tradition, Sharīf Murtadhā claimed that acting with it is permissible in terms of logic, but not obligatory in terms of religion. According to him, the Qur'an, mutawatir k̲h̲abars and ijma including the innocent imam are the definitive source of information and are binding. Since the k̲h̲abar al-wāḥid expresses suspicion, it is not evidence in religion and there is no evidence that makes this news binding. Murtazâ criticized the evidences of the uṣūlists on the subject, and the uṣūlists responded to these criticisms. Our research is based on the evaluation of the sample of Sharīf Murtadhā from the khabar alwāḥid approach in the universe of the Shiite tradition. In the research, it has been determined in addition to the theology of the innocent imam that claiming that there is no evidence requires to act with the k̲h̲abar al-wāḥid, is an inconsistent opinion in terms of nass, consensus and reasonableness.