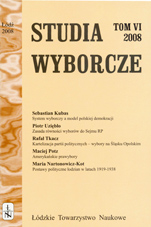 Summary/Abstract: According to The Polish Constitution, the election to the first chamber of Polish parliament was defined as equal. The formal aspect of this election in the narrow meaning, in which every elector posses the same number of votes should be accept without doubts. The material aspect of that principle could cause some controversies. If we define them wider then only as the rules of distribution of the number of seats, which will be distributed in each electoral district, we will find a several elements which are incoherent with the principle of equity. Even the same rules of seats’ allocation don’t realize the equity, because this allocation depends on the number of inhabitants in every district, but not the number of voters or even voters participating in the election. The creation of flexible electoral districts, in which the number of seats depends on the level of participation, would give a chance to respect that aspect of the principle of electoral equity. Also the number of seats to be allocated in districts, especially in case of smaller ones, deforms the electoral results because it gives a favor to the electoral committee with higher level of votes. In addiction the d’Hondt method, that also is profitable for bigger committees, evoke the situation, in which the strength of votes cast for that committees is different than the votes cast for smaller parties. The last element which harms the equity principle in material meaning is an electoral threshold, because the strength of votes for committees, which have a support under that threshold, is practically nothing. Analyzing the results of Polish elections organized on the basis of current electoral law we can clearly perceive that modification of all that elements could change the number of seats for every committee and for the majority of districts, and, as a consequence realize better this two aspects of the constitutional principle of electoral equity.

Integrační klauzule v ústavním systému Polské republiky The Integration Clause in the System of Government of the Republic of Poland 2013 Reenzja Review 2014 ZMIANY SYSTEMU WYBORCZEGO A WYNIKI WYBORÓW DO ORGANU STANOWIĄCEGO GMIN NA PRZYKŁADZIE WOJEWÓDZTWA POMORSKIEGO REFORMS OF THE ELECTORAL SYSTEM AND THE RESULTS OF THE ELECTIONS TO THE CONSTITUTIVE ORGANS OF COMMUNES ON THE EXAMPLE OF THE POMERANIAN VOIVODSHIP 2015 Zgłaszanie kandydatów w wyborach do Sejmu i Senatu. Wybrane problemy Submission of candidates for elections to the Sejm and the Senate. Selected issues 2015 Problemy prawa wyborczego w publikacjach „Studiów Wyborczych” - 2016
2022 © CEEOL. ALL Rights Reserved. Privacy Policy | Terms & Conditions of use
ICB - InterConsult Bulgaria core ver.2.0.0914