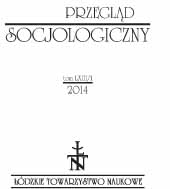 „Mias to to nie firma! ” Dylematy i tożsamość polityczna miejskich ruchów społecznych we współczesnej Polsce
“The City is not a Business!” The Dilemmas and Political identity of Urban Social Movements in Contemporary Poland

Summary/Abstract: The paper deals with the problem of political identity of contemporary urban social movements in Poland. They are clearly not homogenous and their nature is hybrid. The main criterion of differentiation between them is the interpretation of the idea of the right to the city (RTTC) and of urban democracy, which helps to identify significant differences between the three main wings of Polish urban social movements: neo-anarchist movement, tenants movement and middle-class movements. They differ according to their organisational forms, the degree of institutionalisation, strategy, and, finally, how they define the key urban issues. The paper also deals with the issue of a “(r)evolutionary” rhetoric widely spread among urban activists. It indicates progressive functionalisation of the RTTC and urban democracy ideas. On the one hand, both of them are just empty signifiers in Laclau’s terms and are being increasingly used as a fashionable political label. On the other hand, however, thanks to the functionalisation of the idea we can consider urban social movements, in all their diversity, to be a significant driving force of modernisation.