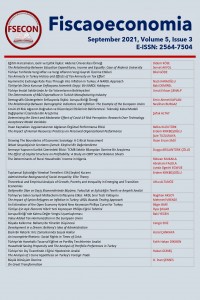 Summary/Abstract: After the “baby boom” of EU countries, the number of children per woman decreased rapidly and today this number is below the replacement level of the population. Due to the decrease in the number of children per woman, the structure of the young dependent population and the working age population has also been affected. During this period, as a result of developments in science, technology and health system, mortality rates decreased and the elderly dependent population increased. The reflection of the decrease in birth and death rates on demographic indicators affects inflation through aggregate demand and aggregate supply. In this context, panel data analysis was conducted to test the effect of demographic indicators for the period 1996-2020 on inflation in EU countries. Inflation was used as the dependent variable and demographic indicators, GDP and unemployment were used as the independent variables. According to the results of the analysis, it has been determined that the elderly dependent population, economic growth, unemployment, and the working age population reduce inflation, while the young dependent population and the increase in the population growth rate increase inflation.