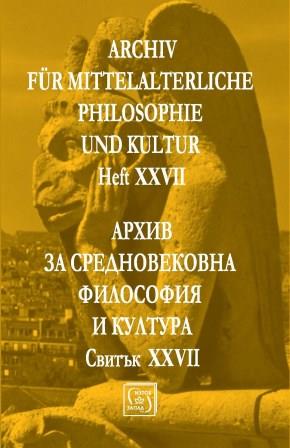 Summary/Abstract: The article is devoted to the new approaches to the study of Renaissance philosophy, which appeared in the 1960s and 1970s within the context of the so-called cultural turn in the Soviet humanities. The author argues that in the same period in which official Soviet historiography on the Renaissance attained maturity and began to reap its fruits, there appeared the first significant alternative interpretations of Renaissance philosophy. The two most important interpretations of this kind were published in the same year, 1978. Those were the books Renaissance Aesthetics by Aleksei Losev and Italian Humanists: Style of Life and Style of Thinking by Leonid Batkin. However, as Losev and Batkin belonged to different generations and had very different educational backgrounds, interests and styles of research, their ‘dissident’ interpretations of Renaissance philosophy and culture had almost nothing in common. If they are similar in any way, it is in that both of the works pursued metahistoriographical aims. Losev devoted the last decades of his life to an unparalleled undertaking in which he sought to give voice to his Christian philosophy, and ultimately, to his religious belief. Unlike Losev, Batkin was not a believer and did not feel the need to use scholarly discourse as a means of conveying religious messages. He also had aims that went beyond the immediate aims of historiography, but they were more personal. The author’s conclusion is that the additional mission Batkin assigned to historiography is not proselytism but self-cognition.