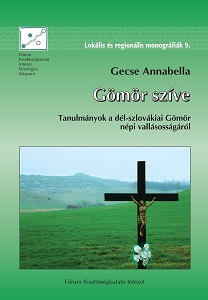 The Heart of Gemer

This work is a publication of the results of a research that was undertaken with the support of the János Bolyai Research Scholarship of the Hungarian Academy of Sciences in the period between 2011 and 2014. During my research, I examined the 20th century folk religiosity of nine Hungarian villages in southern Slovakia: Abafalva (Abovce), Baraca (Barca), Cakó (Cakov), Füge (Figa), Méhi (Včelince), Rimaszécs (Rimavská Seč), Sajószentkirály (Kráľ), Uzapanyit (Uzovská Panica), and Velkenye (Vlkyňa). The area is one of the Catholic regions of the ethnically, linguistically and religiously mixed Gemer, mostly in a Protestant environment.In the introductory chapter of my work, I interpret the concept of folk religiosity and religious ethnography with an overview of academic literature, and then—also with previous research results—I outline the important features of the research area. I divided the folk religiosity of the nine villages into two large units by village. I presented a picture of the folk religiosity of the first half of the 20th century on the basis of records deposited with the Episcopal Archives in Rožňava. As far as possible, I analyzed the data, which developed mostly from Hungarian, and to a lesser extent Slovak, documents on the basis of the same aspects, I tried to capture the relationship and dialogue of the “official” church, the perception of religious practitioners and parishioners and cantors of each other. Specific data for this interpretation were provided by the conflict situations: the two world wars, the expulsions and resettlements, the population exchange, and finally the constraint of the churches after the Second World War. The researchability of ecclesiastical archival sources ends in the early 1950s, so I have expanded the interpretation of the concept of “religiosity of today” from this period to the present day. I obtained data on the folk religiosity of the other time unit by village through field research, ethnographic collecting and participant observation. In the process, I was able to capture the image of the examined villages about each other, and also the characteristics that serve as the basis of the opinions. By analyzing these, the interpretation of the data obtained by the two methods ends. Subsequently, I compiled the archival sources in a separate chapter entitled Data Archive, particularly due to the relatively difficult access to the Episcopal Archives in Rožňava. Here, too, I arranged the documents by village, sometimes only describing their content, but most of the time I published the texts literally, in their entirety, from the analysis of which chapters dealing with the first half of the 20th century were composed. During the field research, I prepared a survey of small sacral relics in all villages. The photographic, measured drawing and text presentation of these forms the next chapter of my work, I have edited the descriptions, drawings and photographs of slightly more than fifty roadside crosses and sculptures into a data repository based on uniform aspects. Finally, for two full years, 2011 and 2012, I compiled the annual order of the spiritual folk songs performed at the Sunday and festive masses in Baraca. In the second year, I also filmed about 50 hours of mass. These recordings are available in the book using QR codes.In the course of my work, the strongest characteristics of the folk religiosity of the examined villages had unfolded. Archival sources provided data on what is the basis of the image of a village in the others. As much as I got a colourful picture of the first half of the 20th century, it is so much common the most defining feature of the religiosity of today. In all villages it could be proved that the official ecclesiastical persons have a much smaller influence on the practice of religion than the so-called laymen, who in all cases are local members of the community (unlike parishioners), native Hungarian speakers (often unlike parishioners) and key persons in religious life. These key people are often amateur cantors, ecclesiastical omnivores in one person, who still keep up the repertoire of folk songs, eulogies, the order of ceremonies, and forms of religious conduct of the 1940s.