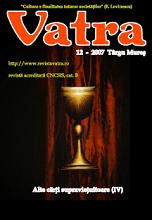 The VATRA review is one of the oldest reviews in Romania. It was set up in 1894 by three classic authors of the Romanian literature: I.L.Caragiale, Ioan Slavici and George Coşbuc. The new succession appears, since 1971, at Târgu Mureş (the first succession appeared in Bucharest). The programme of the review is orientated, first of all, towards promoting the current Romanian literature, but also towards critical, unbiased revaluation of the former literature. There are, in the structure of the review, several permanent headings of literary promotion, from the acknowledged authors to the debutants, and also a very considerable critical sector. The review favours, as a programme, the intercultural dialogue, first of all with the neighbouring cultures and with the cultures of the Romanian minorities. But also is relevant and programmatic its opening towards the European culture on the whole. The review concerns itself with the social-political problems, subjected to thorough ongoing debates. Almost every issue is centred upon such an inquest-debate. But subjects of the same approach are also themes belonging to philosophical, theological, confessional problems etc. The review dedicates constantly issues either to outstanding Romanian and European cultural personalities, or to certain problems of pressing topical interest regarding the European integration. A specific character of the review is also represented by its graphic appearance and, of course, its illustration, achieved by outstanding artists.

THE NEW CO-OPERATION OF VATRA WITH CEEOL WILL OFFER TO THE READERS ALWAYS THE FULL ISSUE OF THE JOURNAL IN ONE SINGLE PDF FILE. BEFORE DOWNLOOADING THE CONTENT-FILE READERS ARE KINDLY REQUESTED FIRST TO DOWNLOAD THE TABLE OF CONTENT FROM HERE ABOVE TO CHECK, WHETHER THE ISSUE OFFFERSD WHAT THEY ARE ESPECIALLY LOOKING FOR.