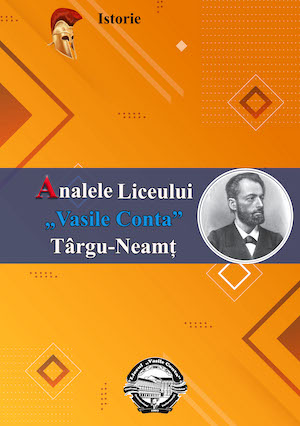 The appearance of a magazine in the scientific landscape is a moment of balance, but it also marks a beginning for the history series of the Annals of the “Vasile Conta” High School in Târgu-Neamț. A scientific series, made up of the hope that it will be continued with other fields.

The magazine appears in a year with important anniversaries for national history. It is 30 years since the Revolution of December 1989 and 15 years since Romania's accession to NATO, 2019 being the year declared by the Romanian Orthodox Church, of the Romanian village.

It is not a local magazine, and the publication does not want a high school magazine, even if it is, but not exclusively, the result of their efforts.

It appears in Târgu-Neamț, but it addresses a wide area, in the idea that in the pre-university, archival and university environment, there are enough intellectual resources, which can be involved in historical and archival knowledge.