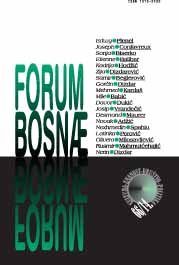 Prompted by their common belief in the importance of escaping from the vicious circle in which Bosnia and Herzegovina is currently trapped, a group of intellectuals founded the NGO International Forum Bosnia in September 1997 as an organizational framework for the development and nurture of open dialogue between all participants in the social and cultural identity of Bosnia and Herzegovina, regardless of their ethnic, religious, political, regional or other affiliation and orientation. One of the activities of the International Forum Bosnia is the publication of a quarterly journal for cultural, academic, social and political issues, entitled Forum Bosnae. In the eleven issues that have been published up to the end of the year 2001, the journal has succeeded in its basic objective - to encourage relevant authors from Bosnia and Herzegovina, from the countries of the former Yugoslavia, and from other Balkan circles and the world as a whole, from various civilizational and spiritual milieux of the East and West, to reflect on issues from the field of their own preoccupations as they correlate with issues raised by the spiritual experience, social reality and imperatives of the future of Bosnia. Forum Bosnae will continue to pursue this course, for only dialogue - serious, responsible, and with the courage to confront all the facts - is able to eliminate the unendurable aporia that has us in its grip: forgiveness and reconciliation are essential to us as a prerequisite for life itself, while at the same time it is equally imperative that the truth be established and the basic contours of a universally desired future postulated. This dialogue, this continually critical scrutiny, of which the guiding principle of the love of the truth, not short-term political or other interest, can be expected of no one other than intellectuals and the independent media public. Once again, then, as who knows how often before, the issue of the responsibility of intellectuals to perform the only tasks for which they are qualified has become acutely topical: that is, to formulate the problems and enter into a free, unconstrained dialogical debate with those of other views. This is but another name for the creation of a normal, civilized living and social environment. The intellectual and academic public in Bosnia and Herzegovina is faced, then, with the priority challenges of many obscure domains and numerous open questions, on the scrutiny and articulation of which conscious self-understanding crucially depends. This touches on all fields and all disciplines that have to do with the form and structure of social life, culture, and attitudes of mind in Bosnia, which always implies, also, the wider area of South-Eastern Europe: history, religion, culture, anthropology, art, literature, language, politics, economics, the law... Forum Bosnae is programmatically open to relevant treatment of issues from all these fields.