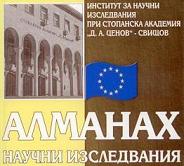 The "Scientific research" Almanac is a specialised referred scientific edition of the Scientific Research Institute at the Tsenov Academy of Economics Svishtov.
The idea of the Almanac's edition arose during the university's 60th-anniversary celebrations in 1996, inspired by the need of laying the foundations of a qualitatively new scientific edition, where leading researchers in the field of social sciences could publish the outputs from their scientific searches. Since 2002, the Almanac also publishes studies reflecting the output of scientific research projects implementation funded under the "Ordinance on the terms and procedure for the evaluation and planning, allocation and spending of the state budget funds in financing scientific or artistic activities, intrinsic to state higher schools (State Gazette, issue 73 of 16.09.2016)" for the inherent to the Tsenov Academy scientific activity.
Since the beginning of 2002, have been published 26 volumes with scientific publications. The "Scientific research" Almanac is listed in the National Centre for Information and Documentation's "National Reference List of Contemporary Bulgarian Scientific Editions" with a scientific review.
The Editorial Board of the Almanac consists of an international research team of leading researchers in the field of economics, administration and management.
The "Scientific Research" Almanac's publishing policy complies with the implemented international standards for publishing and dissemination of scientific output. The ethical conduct norms are valid for all the parties involved in the publishing process. Deposited scientific papers are a subject to an originality verification via the iThenticate system before being accepted for publishing. In case of a habilitated lecturer does not belong to the authors' team, the paper is accepted after being discussed and approved by the Council of the Department and with an attached copy of the Department's meeting Protocol.
All the studies get an evaluation by uniform requirements, laid out in the structure of the proposed by the Editorial Board unified review model. A guiding principle in the editorial policy of the edition is the double-blind review.