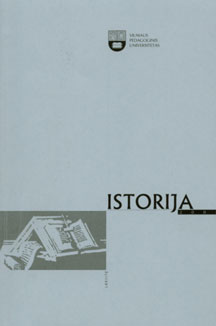 The History is a scientific expert-reviewed journal of continuous publication which is included into the list of the Lithuanian periodic and continual publications accredited for a Ph.D. The journal was first published in Vilnius in 1958. The founder of the journal is the Ministry of Education and Science of Lithuania. Since 1991 the publisher of the journal has been the Faculty of History of Vilnius Pedagogical University (the chair of the editorial board is Dr. Associate Professor Eugenijus Jovaiša, Vilnius Pedagogical University). The journal belongs to the series of a Collection of Lithuanian Universities’ Research Papers. Four volumes of the journal are issued annually (during the period covering 1997–1999 there were 2 volumes issued; since 1999 four volumes are issued annually). Until 2005 there have been 62 volumes issued. The journal comprises 10 printer’s sheets; its circulation is 300 copies. The journal contains the following regular chapters: From the Past of the Nation, Memoirs, the Sources of History, the History of Science, Historiography, the Philosophy of History, the Didactics of History, Attitude, Reviews, Chronicle, In Memoriam, Summaries in a Foreign Language. The journal carries not only articles but also sources, reviews, conference surveys, reminiscences of various historians and public figures, as well as discussed publications on controversial facts and interpretations of the newest events. The salient feature of the journal is that it runs a number of the articles by foreign authors. One more significant feature is the development of the interdisciplinary approaches: it published various articles by sociologists, political scientists, specialists of the Lithuanian language and philosophers. The journal is open to novice historians. The period of 1994–2004 saw 51 articles by postgraduate students. The journal is appealing by its design. A lot of illustrations are published in it. The journal has its own website, which publishes the staff of the editorial board, the tables of contents of the already published volumes of journals; there one can find information about the requirements for the publishing of articles and have a look at the announcements of the newest publications (see http://www.vpu.lt/vpu/leidykla/istorija/). The language of articles: Lithuanian, English, French, German, Polish.