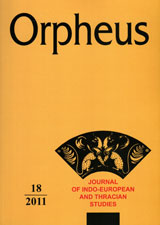 The issue includes articles with interdisciplinary character in Antiquity and Early Byzantium, as well as linguistic studies. The Section Reviews presents the new book on Thracian Hydronymy. The Section Bibliography continues the tradition of previous years to provide research on selected problems of Thracian Studies in Bulgarian (2005–2009). Orpheus accepts submissions in English, French, German, Spanish, and requires brief abstracts in English. Regularity: irregular.

The Editorial Advisory Board is composed by Members of the International Council of Indo-European and Thracian Studies.

The Institute of Thracology (IT) was created on May 12th 1972 with Decree No. 185 of the Council of Ministers of the People’s Republic of Bulgaria as an autonomous research unit of the Bulgarian Academy of Sciences (BAS) with founder and director Prof. Alexander Fol. The Institute was named after him following a decision of BAS’s General Assembly dated April 3rd, 2006. The following year, on June 25th, 2007 another decision of the General Assembly transformed it into the “Prof. Alexander Fol” Centre of Thracology (CT). Since July 1st, 2010 the Centre of Thracology has been integrated in the Institute for Balkan Studies under the name of Institute for Balkan Studies & “Prof. Alexander Fol” Centre of Thracology of BAS. The Institute of Thracology was conceived as a specialized unit for multidisciplinary study of the history of the Thracian Antiquity, in charge of coordinating the investigations in the context of the Palaeo-Balkan historical development, of the Pre-Greek and Non-Greek components in the ancient historical and cultural space stretching over the Balkan Peninsula and Western Asia Minor and focused upon the Thracian history, culture and language within the larger context of Indo-European studies – essential part of the European and global cultural heritage. The International Council for Indo-European and Thracian was created in 1988, the Institute of Thracology chosen as Seat of its Secretariat, in charge of publishing its periodical Orpheus. Journal of Indo-European and Thracian Studies and until March 1st, 2006 – Prof. Alexander Fol as its Secretary General. Members of this Council are 40 academics from 15 countries.

The Institute (now the Centre) of Thracology has published a number of specialized periodicals: Expeditio Thracica (1-5, 1980-1983); Pulpudeva. Semaines Philippopolitaines de l’histoire et de la culture thrace (vol. 1-6.1, 1976-1998) jointly with the Archaeological Museum – Plovdiv; Thracia Pontica (vol. 1- 6.2, 1982-2003) jointly with the Centre for Underwater Archaeology – Sozopol and still maintains the principal publication of the Institute (now the Centre) of Thracology – the series Thracia (since 1972) – a miscellanea of articles on various themes submitted by Bulgarian and foreign authors; Studia Thracica, Series Monographic studies (since 1975)