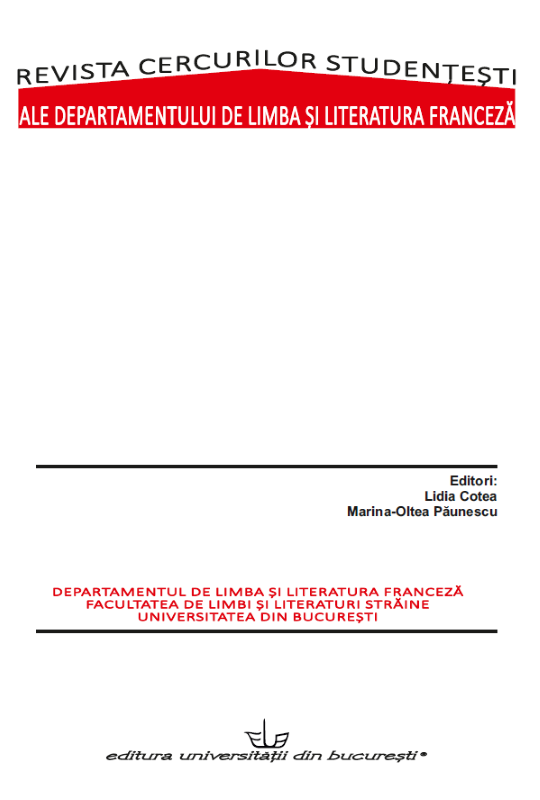 Hosted by the Bucharest University Press, Revista Cercurilor studenţeşti ale Departamentului de Limba şi Literatura Franceză (RCSDLLF) – ‘The French Department’s Student Research Group Journal’ – is a yearly publication of the French Language and Literature Department (Faculty of Foreign Languages and Literatures, University of Bucharest), founded in 2012 and opened to contributors among the students of all 3 education degrees the Department provides (bachelor’s degree – licence, master’s degree and doctorate). The journal gathers the best papers authored by members of the Department’s five student scientific research groups: French Literature, Culture and Civilization; French theoretical and applied linguistics; ContrasTER (Contrastive analysis, specialized translations and terminology), CENTRAL (literary translations), and The extreme contemporary literature: the Prix Goncourt. Selections by Romanian Students (a research group organized around the works of the Bucharest Jury that designates the Romanian laureate of the Prix Goncourt, an international cultural event the French Language and Literature Department is part of since 2013). Other contributions presented by our students in all kinds of national or international scientific events are also included. Each contribution is validated by an expert who officially endorses its coordination as well as by a prestigious international scientific committee.

During the past years, RCSDLLF – a unique undertaking in student scientific research on the international level – set rather high standards of excellence for the youngest generation of true researchers, and it was recognized as such not only in Romania, but also abroad. In effect, the journal gained more and more international visibility due to the direct involvement of the French Language and Literature Department, through some elite student teams, in the Jury for the Goncourt Prize. Since 2017, the journal is also open to contributors from other French departments in Romanian universities.

RCSDLLF is a special presence in the landscape of Romanian humanities journals due to the young age of both its authors and of its target audience (bachelor’s degree students, master students or doctoral students). While still very young (most of them just earned their bachelor’s degree), the authors exhibit exceptionally mature analytical and hermeneutical skills, and their papers set genuinely top standards in scientific research that benefit all their colleagues (the main readership of the journal).