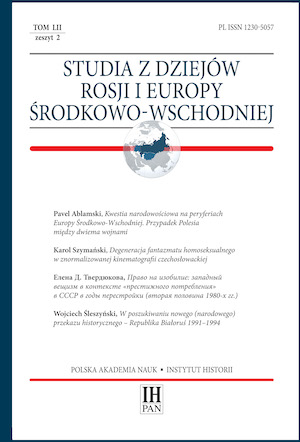 “Studies into the History of Russia and Central-Eastern Europe” is published by the Tadeusz Manteuffel Institute of History of the Polish Academy of Sciences (IH PAN). Over the last 50 years the journal was published once a year. Starting from no. XLVIII it has been published twice a year in a completely new graphic layout. This worldwide scientific journal is devoted to widely understood history of East and Central Europe, the USSR and Russia in the 19th and 20th century. We also publish articles and research works concerning European region’s connections with remaining countries in the whole world together with dissertations on the history of empires.

“Studies into the History of Russia and Central-Eastern Europe” is in ERIH INT-3 (the European Reference Index for the Humanities) and IC JML (the Index Copernicus Journals Master List). The journal is also indexed in CEJSH database (the Central European Journal of Social Sciences and Humanities) and BazHum (a bibliographic database of journals from humanities and humanistic social studies).

The first issue of the journal was published in 1965 and was titled “The USSR and Central European History Research”. In 1992 the title was changed to “Studies into the History of Russia and Central-Eastern Europe”.